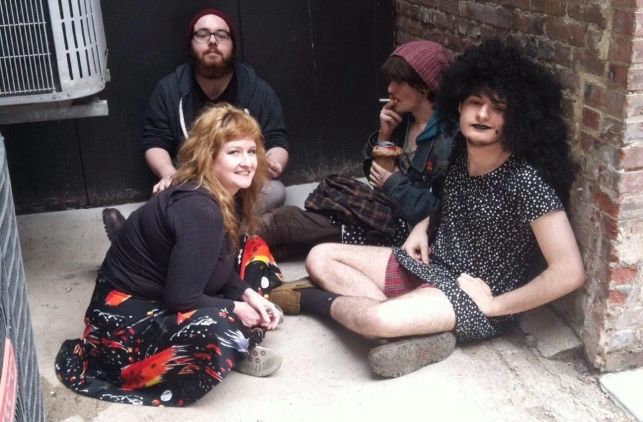 Tantrum Throwers is a project I started with my friend Luke, after Culture Chester broke up, in September 2015. We rehearsed and put together an abstract rock album, Throw Tantrums, in November. In March 2016, we turned our two-man collaboration into a four-piece group, and invited Kristin Owens and Jonah Thompson to join us. In August 2016, the four of us released the 2-hour behemoth Futrepaction, the entirety of which was improvised. The instrumental palette includes guitar loops, synthesizer, saxophone, bowed guitar, bowed bass guitar, slide whistle, double drummers, harmonica, and thumb piano.

The musical style is free-form and sporadic, the instruments are intentionally not synchronized, and the ensemble often erupts into noise and violent fits.

We have played several live shows in Des Moines, and one in Rock Island. Every Tantrum Throwers show was improvised. Much like Culture Chester, a Tantrum Throwers show was always energetic, unpredictable, and sometimes violent. We were often joined by our friends. In January 2017, we released the live album A Circle of Strange, collecting the live recordings of the past year.

In July 2017, Tantrum Throwers recorded the outlying "self-titled" tth as a final album. We disbanded in October 2017, after having only a few shows that year.